Are you over 21?
Not Quite
Skip to main content
Join us at the Riverside Tasting Room on December 17th from 2-7pm for a Last Minute Holiday Market!
Instagram
Follow us
View Open 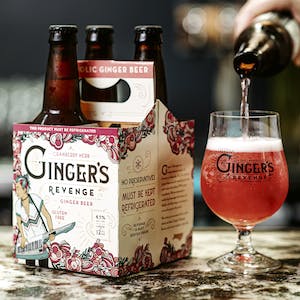 “When creating the characters for our flagship bottles, it felt important to start with a strong female lead – Ginger the Drummer – and add characters representing relatable, intentional, and creative people,” says Cristina Hall Ackley, Ginger’s Revenge Co-Founder. “We want the characters represented in the Ginger’s Revenge band to be inclusive and well-rounded. The Cranberry Herb packaging was created in 2020, and we’re proud to give space to a non-binary character. While we don’t have immediate plans for another character or flagship bottle design, we’re excited to think about what could come next!”

The brewery is pleased to share this prestigious worldwide accolade with Atlas Branding, an Asheville-based husband and wife branding studio. “We were really excited to enter our clients’ packaging design into the Crushie Awards this year as it’s such a high quality industry design award competition,” says Lisa Peteet, Creative Director and Co-Founder of Atlas Branding. “When we develop a new character for the Ginger’s Revenge beers and band members, we collaborate closely with their team on crafting a character’s persona before we start designing. For Cranberry Herb, we wanted to character to feel a bit androgynous and highlight all of the pink and green tones of the ingredients without it feeling ‘holiday’. We also love that they are rocking out on a Keytar! We’re honored to share these awards with both Ginger’s Revenge and Fae Nectar.”